You're using an unsupported browser. For full functionality, please migrate to Chrome, Firefox, Safari, or any other maintained browser.
April 24, 2021

At the beginning of Women’s History Month, Michelle Obama released the young reader version of the book Becoming. This book is meant for children ages 10 and up, but Meghan O’Rourke’s third grade class at LEARN 7 Elementary School took an interest in the book and took on the challenge of reading this book with excitement. Students wanted to learn more about the former First Lady through her autobiography, even if it was a more challenging book to read.

“I could see the excitement in my scholars’ faces when we were talking about the release of the young reader version of Becoming,” says Meghan. “We could have read it as a read aloud, but I knew it would be more impactful for my scholars to have their own copy of the book.” So Meghan’s community came together in just 48 hours and she was able to secure donations so each scholar could have their own.

Her scholars are tackling some of the most pivotal sections of the book, including when Michelle had to overcome great challenges to achieve her dreams. In the second chapter, Michelle tells the story about the hard work she put in to be at the top of her Kindergarten class. Their teacher would hold up flashcards with colors on them. Students were to read the names of each color on the card. It was Michelle’s turn. She began to rattle off all the colors on the flashcards. W-H-I-T-E came up and she froze. She did not know the word.

The next morning, Michelle asked for a do-over. When her teacher said no, she demanded it.

This story from the memoir resonated with scholars. The takeaways? 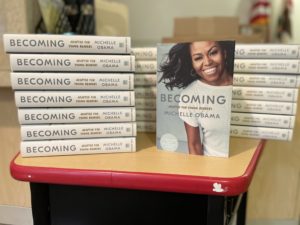 Meghan’s students are from East Garfield Park on the West Side of Chicago. At LEARN 7 Elementary School, her scholars live in an educationally under-resourced community. They inevitably face challenges, but they are learning how to overcome hardships, build resilience and advocate for themselves.

“This year has been challenging for everyone,” says Meghan. “I have only met a portion of my scholars during hybrid learning in-person. I keep asking myself, ‘How can I make this extraordinary year special and continue to bring joy to my scholars?’” Meghan has infused activities during this school year for both her third grade class and also the entire school to help bring joy to learning. She kicked off the year with a YouTube video project where all her scholars used their technology to introduce themselves to their classmates and new teachers.

Additionally, she helped contribute to the LEARN 7 College Project where all scholars learned about the pathway to a chosen career. Scholars ended the project by picking a career they were interested in pursuing and mapping out their academic journey after college to achieve their dreams.

During the holidays, Meghan wanted to make sure her students felt loved from afar. She crowdsourced donations from her community; due to an overwhelming amount of support, every student and their siblings received gift boxes filled with warm winter gear, flashcards and other goodies. 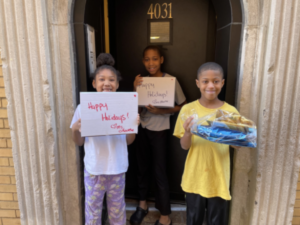 One theme that her class has discussed over the course of the year has been failure. Everyone fails — it’s what you do with that failure that makes the difference between getting stuck and growing from it. Becoming reminds every reader of this theme, as seen through the failures and successes of Michelle Obama’s life. Above all, she reminds us that we all have the tools to be successful if we know how to use them.

During a year of uncertainty and likely, many failures, this reminder will likely remain in the minds and hearts of these LEARN 7 scholars for years to come.