You're using an unsupported browser. For full functionality, please migrate to Chrome, Firefox, Safari, or any other maintained browser.
May 26, 2020

Michael Stewart, who teaches at LEARN South Chicago, is among 10 teachers to be honored with the prestigious award this year.

Michael Stewart was in the middle of teaching his eighth-grade class when there was a knock at the door. His wife told him to answer it.

“I’m sitting here like, ‘All these people in the house and no one can answer the door?’” Stewart said.

There was a good reason his wife insisted that he get the door. Waiting for him on the other side were his school principal, colleagues and Alan Mather, President of Golden Apple, to surprise Stewart with the news that he was one the 2020 recipients of the Golden Apple Award for Excellence in Teaching.

“It was one of the biggest surprises I ever had,” Stewart said.

Stewart has taught seventh and eighth-graders at LEARN South Chicago, 8914 S. Buffalo Ave, for several years. He is among 10 teachers for fourth through eight grade in the state to be recognized this year, according to Golden Apple.

Stewart, originally from Jamaica, grew up in Rogers Park and Evanston. He graduated from Evanston Township High School before attending University of Illinois at Urbana-Champaign.

While education had always been the family cornerstone — Stewart’s mother and sister are educators — he briefly entertained the idea of becoming a lawyer, even interning at Chicago law firm Jenner & Block the summer of his junior year.

A chance run-in with an old basketball buddy during a field trip to Cook County Jail made Stewart change course.

“I asked him what happened. ‘How did you get here?’ He’d only tell me that he didn’t take his education seriously,” Stewart said. “I remember going home later that night and thinking ‘Man, this ain’t right.’ That could’ve been me. My grandmother would tell me that ‘Prevention is the cure.’ That’s what education is.”

After graduation, he applied for a teaching position back at Evanston Township, and that’s when he knew his fate had been sealed. He joined a Caribbean academic program as a teaching assistant, and found the perfect mentor in a first-generation Jamaican-American who was married to the woman who ran the program.

“Teaching those students was like teaching myself,” Stewart said. 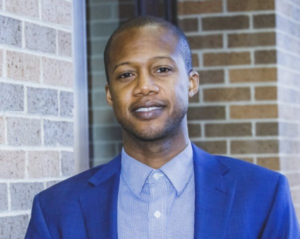 Golden Apple winners receive a $5,000 award and a Spring sabbatical, courtesy of Northwestern University.. Recipients also become fellows of the Golden Apple Academy of Educators, a community of teachers who mentor current and future teachers.

Though many of his Black male counterparts have gone on to administrative positions, Stewart feels his place is in the classroom. The dearth of Black male educators is a sticking point for him, and he said he hopes to use his new fellowship status to bring more Black men into the fold.